Reforming transport is key to solving the climate crisis

With climate change well underway, the only way we can avoid the worst of a climate catastrophe is by urgently reducing emissions and reviewing the way we live, work and travel.

Transport Action Network is fighting to end the UK government’s obsession with building ever bigger roads and treating those who rely on public transport as second class citizens.

Where are we now?

A bleak assessment by the UN, published ahead of COP27, suggests that there is "no credible pathway" to keep the rise in global temperatures below the key threshold of 1.5C. The report says that since COP26 last year, governments’ carbon cutting plans have been "woefully inadequate”.

Indeed UN Secretary General Antonio Guterres issued a stark warning at COP27 about the lack of progress, saying that the world was on the “highway to climate hell with our foot on the accelerator.”

These challenges are global, but it is the responsibility of governments on a national and local level to play their part. This change has to happen on multiple fronts and across all sectors.

Many parts of Wales have limited access to public transport and where there is public transport it is often poor quality, and/or expensive. Bus fares increased by 3.5% from 2019 to 2020 alone, and rail fares have risen by 3.8% in 2022. Additionally, between 2019 and 2020, Wales suffered a loss of 690 bus stops (about 3%), making it even harder to catch a bus.

Our rail network is counter-intuitive, with north south links going on big detours via England. Complicating the situation, rail is only partly devolved (only the core valley lines come under the jurisdiction of Welsh Government) and Wales has systematically lost out when it comes to rail investment by the UK Government.

Active travel has received significant investment over the past few years, yet the network of safe cycling and walking routes is still too localised and sparse to support radical behaviour change. Moreover, for this shift to stick, sustainable transport needs to be prioritised, and not marginalised as at present, within the planning system.

This has created a situation where many people, especially in rural Wales, are dependent on their car, which brings its own set of issues. In most areas of Wales, 40-50% of households are spending more than 10% of their income on the costs of running a car. 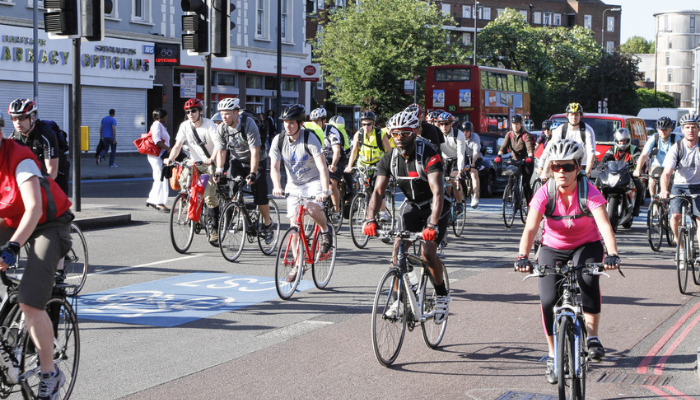 While the current situation is bad, politically, the terrain is ready for change.

When First Minister Mark Drakeford came to power in 2018, one of his first major decisions was to scrap the building of the M4 relief road on environmental grounds and set up a commission to look at alternatives. Since then, the Welsh Government has published a new transport strategy pledging major reductions in transport emissions over the next 20 years. It set a target of 45% of journeys to be made by public transport, walking and cycling by 2040 and established a sustainable transport hierarchy at the heart of all transport-related decisions.

Within the current cabinet, transport falls within the Ministry of Climate Change and the portfolio is led by Lee Waters, previously Deputy Minister for Economy and Transport. 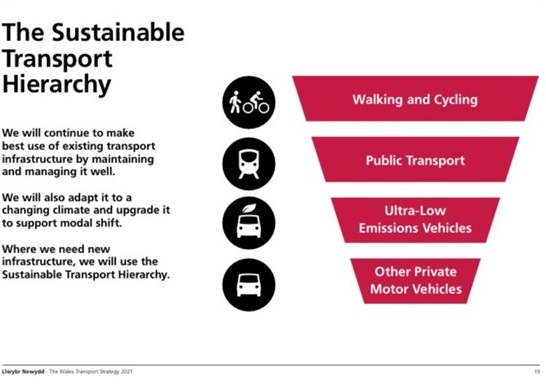 In Summer 2021, Lee Waters set up an independent review panel to look at all major road building projects that do not yet have a spade in the ground. They will be assessed as to whether they match the government’s climate change objectives and commitments to net zero. This is groundbreaking, as it paves the way for a radical change to transport investment, away from the default of building a road.

The publication of the Roads Review Panel’s report and the Government’s decisions as to which schemes will go ahead and which will be cancelled has been delayed. Responding to the Panel’s recommendations is complex and has been impacted by the reduction in Wales’ spending power following the UK Government’s financial crash. An announcement is now most likely in the New Year.

The public reaction to these decisions will no doubt challenge the commitment of the Welsh Government. We expect roads that are scrapped are bound to catch the headlines, but hope that the change in policy that will accompany this will set the new parameters for future road projects. This will be essential for building a more sustainable transport network.

At TAN we will be watching closely and keeping our supporters up to date as the announcements are made. You can find out more about our work by visiting our website.

Transport Action Network was set up in 2019 and is run by six people committed to helping local communities press for more sustainable transport in England and Wales. This involves fighting cuts to bus and rail services, particularly in rural areas, and opposing damaging road schemes and large unsustainable developments.

That's why in the UK we are actively challenging the UK Government's plans for damaging new roads on climate grounds. We have previously taken legal action against the UK.

You can find out more about our work by visiting our website.