Let’s all get behind the draft transport strategy!

The Welsh Government is consulting on its new transport strategy. Here, Dr Ian Taylor explains how it is our best hope for a transport system which is fairer on people and planet.

It’s not every day a government says tackling the Climate Emergency will be front and centre of its transport policy.

But that is what the Welsh Government is now doing in Llwbyr Newydd: A new Wales Transport Strategy, published for consultation.

'Rogue sector of the economy'

If the Welsh Government can follow through on its intention to make transport policy decisions according to whether they help the climate recover, rather than make it worse, our transport policies will look very different. 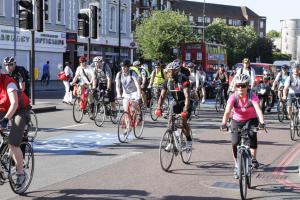 The priorities for transport investment to address the Climate Emergency would be massive investment in public transport and in ‘active travel’ by walking and cycling, both things which will also help solve our obesity health crisis and our toxic air pollution crisis.

And yes, public transport remains a crucial part of a climate-friendly transport system, despite Covid temporarily impairing its usefulness. Conversely spending on road building would come to a halt.

Financial support to avoid travelling altogether by working remotely would be ramped up, creating networks of superfast remote working hubs in every community to cater for those whose home environment unsuitable for work. The Welsh Government have, commendably, already announced a separate target to get 30% of people working remotely.

'Fit for the climate emergency'

This draft strategy is just a consultation draft, which is still vague and imperfect in many respects, and is liable to change. It could change for the worse if the usual vested interests in favour of the status quo get their way, or it could keep its admirable ambition, or even be improved if we all get behind it. One thing is for certain, if we don’t get active and support this, we will miss a once-in-a-lifetime opportunity to achieve a transport system fit for the Climate Emergency.

In the year 2000, the environmental movement lost a key battle against the protests over planned fuel price hikes. I still feel the scars, since I was working in Greenpeace UK’s climate team at the time. As a result, fossil fuels for vehicles have got cheaper in real terms ever since, losing us two crucial decades in the war against climate change. So we must get behind a transport strategy that has the climate emergency as it’s priority.

Mark Drakeford showed his bravery when he first came to office and cancelled the indefensible plans to build more M4, which would have pushed up traffic carbon emissions just at the moment we must reduce them, and simultaneously trashed the precious ecology of the Gwent Levels. In the draft Wales Transport Strategy the Welsh Government says “We will support a move from fuel duty to a more equitable approach to road charging that can assist with improving air quality and congestion in urban areas, whilst recognising that some people, including those in rural areas, depend on car use”. This is a game-changer.

We all know that the take-up of better public transport and better cycling infrastructure is strongly influenced by the cost of motoring. But this won’t be part of the final Wales Transport Strategy unless enough people respond to this consultation to say they support the idea of road user charging. It is crucial that we all get behind it.

It is of course also important to make public transport more affordable – as well as more available. In fact we at Transport for Quality of Life believe that some or all of it should be provided free, as now happens in more than 100 cities around the world, as part of offering car users a fair deal in exchange for road user charging.

Although its hands are tied by limited devolved powers, the Welsh Government’s draft transport strategy gives us hope for a transport system that is fairer on people and planet, containing the seeds of world-leading transport policies. These would build on Wales’s proud new tradition of institutionalising a sustainable social and environmental vision in the Wellbeing of Future Generations Act.

Wales can do it again and again be a world-class exemplar. Let’s get out there and get behind the draft Wales Transport Strategy!

The consultation runs until January 25th. To respond online please go to https://gov.wales/llwybr-newydd