How to save the planet from poor decision-making

Bleddyn Lake considers shines a light on how poor decision-making is threatening to derail our efforts to solve the climate and nature emergencies and how we can inoculate ourselves against it.

Whether we manage to stop catastrophic climate change or not will come down to decisions. Some of these decisions will be up to us individually to make such as whether we go back to jetting off on holiday at some point or not or whether we swap our electricity supply to a renewable energy tariff or not.

Some decisions will be made by people in big businesses and companies, for example supermarket bosses will decide on how quickly to eliminate plastic packaging, put doors on their fridges and move to sourcing only sustainable palm oil for their products.

Other decisions will be made by people in public bodies, whether they are elected members such as local councillors or Members of the Senedd or by officials working in these institutions.

Someone somewhere is responsible for making all these individual decisions that add up to impact on our lives and the lives of our children and future generations, endangering a multitude of other species who share our planet with us.

Let’s start with some positives. 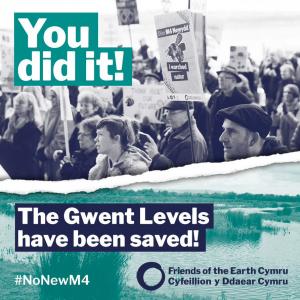 The decision by the Welsh Government not to go ahead with the M4 Relief Road was a strong and welcome decision as has been their recent announcements on a new transport strategy (Llwybr Newydd), a moratorium on new, large incinerators, the new Beyond Recycling Strategy and the pause on new road building projects as well as the creation of the new Climate Change Ministry.

The Welsh Government has put the fight against climate change front and centre of their work and has committed to new legal climate emission targets which ‘will force a 63% reduction by 2030 and 89% by 2040, with Wales reaching 'net zero' - effectively a 100% cut - by 2050’.

But how can we meet these new targets when decisions made at all levels will be adding thousands or even millions of more tonnes of CO2 into the atmosphere?

'What we need is for individuals to make good decisions.'

As much as we can all talk about the need to reduce emissions sector by sector such as from transport or from housing, what we need is for individuals to make good decisions. At some point, each project, each new development, will need one or more people to be deciding to do or not do something.

Sometimes the people making these decisions will be aware that their decisions are significant in the fight against climate change; at other times, they may not be. 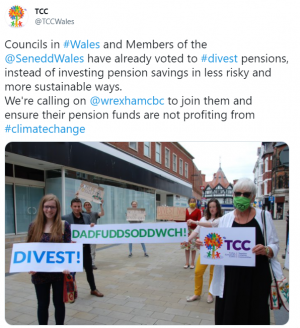 Last week (23rd June) Wrexham Council took a vote to, amongst other things, ‘Mandate its Clwyd Pension Fund representative(s) to press for the rapid disinvestment in carbon fuel companies at every available opportunity.’

Despite the council unanimously declaring a ‘climate emergency’ in 2019, the prospect of asking their own representatives on the Clwyd Pension Fund committee to support divestment was still too much for a majority of councillors and the vote was lost by 19 votes to 15.

So, let’s be clear on this. Wrexham Council is one of a number of bodies which pay into the Clwyd Pension Fund. They still have money invested in fossil fuel companies.

The divestment movement argues that it is financially and morally prudent to stop investing in the very companies driving climate change.

Divestment is about taking a decision to no longer invest in these companies and then setting a timetable for that to happen.

The motion before Wrexham Council was about mandating their representatives on the Clwyd Pension Fund committee to go to meetings and push the case for divestment. It was not even about divesting money from one day to the next.

To say that it is disappointing that 19 councillors voted against and therefore defeated the motion would be a major understatement. 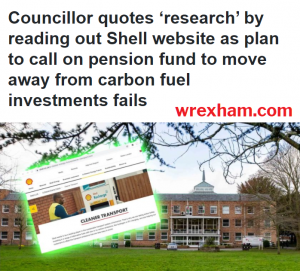 What is even more galling is to see and hear some of the reasons councillors gave for voting against the motion!

These range from not wanting to ‘meddle’ in (pension fund) trustee matters to quoting Shell’s own website as evidence that everything is fine and they are doing all they can, to talking about how police could go about their business without petrol in their cars.

The 8 Local Authority Pension Funds in Wales could ask the people who have pensions with them whether they want their money invested in fossil fuels or not. It would be an easy exercise, just state the case for continued investment in fossil fuel companies and next to it state the latest science on climate change and the case for divestment, and then let people decide. Of course, pension funds are reluctant to do this because they probably wouldn’t like the answer! Let’s not let democracy get in the way of business as usual! 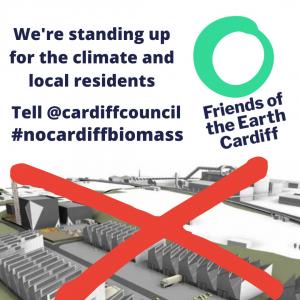 Conversely, Cardiff Council has taken the decision to divest their pensions from fossil fuels but earlier this year, their Planning Committee  gave renewed planning permission for a biomass plant which would burn 75,000 tonnes of virgin timber from Latvia each year. This is despite Cardiff Council previously declaring a ‘climate emergency’.

Aside from the concerns raised in the above link, how does importing and burning virgin timber from Latvia square with the climate emergency?

The short answer of course is that it doesn’t. 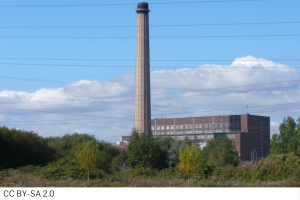 And on to another planning issue.

‘The merits of the scheme weigh significantly in favour of it and any adverse effects deemed to arise from impact on landscape and impact upon amenity must be balanced against such merits. Officers are of the view that the proposal is not likely to have a significant adverse effect on the environment. In this case, it is considered that the merits of the scheme outweigh the objections and recommend permission is granted subject to conditions.’

This line is worth a second read I think … 'Officers are of the view that the proposal is not likely to have a significant adverse effect on the environment'.

Thankfully, following requests by Friends of the Earth Cymru, CPRW and Friends of the Gwent Levels, the Welsh Government acted swiftly at the 11th hour and issued a ‘holding direction’ to prevent Newport Council’s Planning Committee making a decision. They have now officially ‘called in’ this application.

The need for joined-up thinking 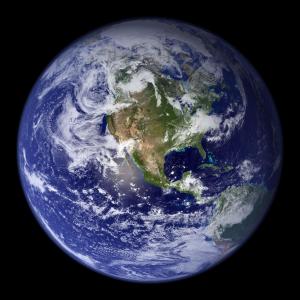 Given the Uskmouth proposal would emit an eye wateringly massive 1,550,000 tonnes of CO2 per year for the next 20 years, it’s a good job that the Welsh Government acted so swiftly! To put these possible emissions in context, they would be the equivalent of adding another 68% of Welsh car emissions onto the annual greenhouse gas emissions from Wales.

Given how hard a job it is to reduce climate emissions generally, adding a whacking great big bunch of emissions like that into the mix is the last thing we need. Let’s now hope that Welsh Government take the decision to refuse permission for this proposal. After their recent announcement of a moratorium on large scale incinerators, they can’t really give this the go-ahead …..can they?

With all local authorities in Wales now having prepared their own ‘decarbonisation by 2030’ plans, decisions are absolutely crucial, as is the need for thoroughly joined-up thinking across the board. It’s no good if the ‘left hand’ is planning for full decarbonisation if the ‘right hand’ is then giving the go ahead to massive new sources of emissions.

Equally, if local authorities are intent on actually acting on climate change they can’t ignore the calls to take their money out of fossil fuel investments and Local Authority Pension Funds (LAPFs) need to be listening to councils when they themselves call for divestment. Despite an awful lot of pressure on these councils over the last 4 or 5 years, you’d be surprised at how many councils have been reluctant to even have a debate and vote on divestment! Some just simply don’t want to know.

And it’s not just councils of course, many other organisations pay into LAPFs. Have a look at pages 74 and 75 of this Annual Report for the Dyfed LAPF for a typical example of what sort of other organisations pay into these LAPFs and who could also all be taking the decision to ask their own pension fund to divest. We don’t hear from them at all however. There are still an awful lot of heads being buried in the sand on this issue and poor decisions, or no decisions, being made.

I could of course go on and on with these sorts of examples both recently and historically.

What they do go to show is that there still needs to be a sea change (and not the sort brought on by climate change!) in how some people in public bodies and organisations see their roles in terms of climate change before it’s too late.

So, is there a way around this?

The case for Carbon Literacy 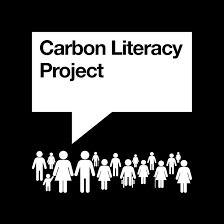 There is an interesting project based in Manchester called Carbon Literacy.

They state that: ‘Carbon Literacy means being aware of the impact of everyday activities on the climate, and knowing what steps can be taken to reduce emissions as an individual, a community group, or an organisation, and why it’s important that we all take these steps. The actions of individuals can and does make a difference. Learners who have completed a days’ worth of approved Carbon Literacy learning can be certified as Carbon Literate.’

Some councils and other organisations are already undertaking this training. The central idea really being that once you know about the impacts of your actions on climate change, you can’t then ‘un-know’ them. Hopefully this improves awareness of actions and decisions.

Wouldn’t it be sensible then for all councils, other public bodies and associated bodies such as these pension funds to have to undertake this Carbon Literacy training?

With the UN COP26 climate change talks in Glasgow approaching towards the end of the year, it would seem like an opportune time for a decision to be taken that all public servants and officials in public bodies in Wales will undertake this carbon literacy training.

There is of course a danger that some bad decisions are only really known about in the local areas or the specific sectors in which they happen and are then forgotten about a few months later as we all move on with our lives. However, what if we were to keep a record of all these decisions, who is taking them and what the cumulative impact in terms of climate emissions is?

I reckon we would all be shocked.

The examples above are just ones that came to mind as they happened relatively recently.

And I’d be willing to put a few quid on the fact that they aren’t the only strange and unnecessary decisions made in Wales in recent times that will increase our emissions.

Speaking of which, one last thing, it’s high time we ended the subsidy for the north-south air link in Wales. That’s surely incompatible with Wales’ net-zero target!

The time for better decisions is here.