Why supermarkets should put doors on their fridges

Supermarkets could save enough energy to power 730,000 homes if they put doors on their fridges. Friends of the Earth Cymru volunteer, Joe Cooke, urges supermarkets in Wales to make this important change for the sake of our planet.

Previously, supermarkets have voiced a desire to reduce their environmental impact. During the coronavirus pandemic, they have shown how quickly they can adapt to a situation. But there are still no doors on supermarket fridges, despite 10 or more years of support for this change.

By taking this step, supermarkets could save substantial amounts of money and energy. This drastic reduction in their carbon footprint could go a long way in helping the UK to become carbon neutral and to reduce the effects of climate change. We urge them to take this step now, for the sake of our planet and future generations. 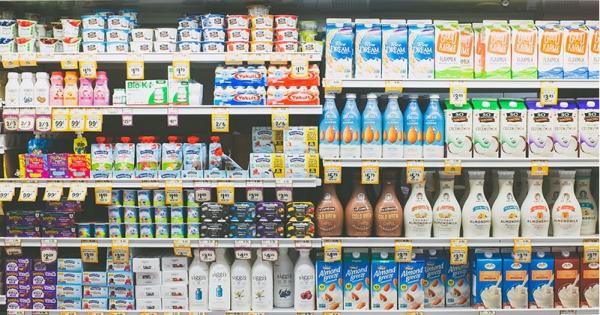 Photo by NeONBRAND on Unsplash

Without fridge doors, a lot of the energy it takes to keep food cold escapes. Ever noticed that it’s always freezing in a supermarket? According to this news article from 2013, the major supermarkets in London are colder than the arctic!

How much energy is wasted?

UK supermarkets use 1.5 million kWh of energy, of which fridges and freezers use 60-70%. On top of this, The Times suggests supermarket fridges use 1% of the UK power supply each year. To put this into perspective, one 2.5 meter fridge without a door releases 7 tonnes of excess CO2 a year.

It's been estimated that the average home in the UK uses 4000kWh of energy each year, so the energy saved by fitting a door to one single fridge is enough to power one home for a whole year!

Many supermarket fridges also release refridgerant gases known as Hydrofluorocarbons (HFCs). HFC gases are ‘super greenhouse gases’, meaning they trap a thousand times more heat than Carbon Dioxide. Although the EU has banned the use of HFCs in new refrigerators, they are still in use now.  Big supermarket companies in the UK have agreed to phase out the use of HFCs, but one UK supermarket chain is waiting until 2030 until they’re not used at all. With a door on the fridge, the amount of HFC gas needed to keep the food cold would be less. And of course, less HFC gas released, less global warming. Which is what we all want.

What supermarkets are saying

The major retailers in Wales responded to a petition last year giving their side of the argument. While it is good to read that they have reduced their carbon footprint, they don’t address the issue of fridge doors. It seems that despite the ambition to be carbon neutral as soon as possible, it is not something supermarkets are willing to commit to. But why?

Some supermarkets have said that people will be less likely to impulse buy if there are doors on their fridges. 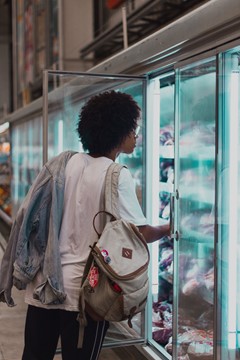 Supermarkets are worried that putting doors on fridges will affect sales.

It's not certain this will happen but if it does, hopefully the reduction in impulse-buying will be offset by lower energy bills. For example, the Co-op put doors on their fridges in 2012 and reported a £50m a year saving. And the bigger companies will save even more.

The changes made during the pandemic have demonstrated customers’ ability to adapt to different conditions.  We simply got on with it and we will do the same with this. We will slide the door open and get our favourite products. After all, I would be willing to do a lot more than that to get my hands on an ice-cold beer!

Besides, impulse purchases often lead to food waste, as we are buying things we don't need. So, fridge doors may also have the added benefit of reducing food waste. Subsequently, supermarkets will have to adapt again by buying and producing less produce, saving more money. And, of course, our wasteful attitude takes its toll on the planet too.

Yes, supermarkets should be commended for their progress in phasing out plastic bags. However, in 2010 the Environmental Investigation agency discovered that emissions from fridges have a greater environmental impact than plastic bags. The facts are listed above and included in multiple different blogs, petitions, and news articles. It is time to act.

Is technology the answer?

The UK government eluded to the fact that there are more and more alternative technologies to increase the efficiency of chilling food. In 2019 Tesco committed to adopting Aerofoil technology in its stores in the UK and Ireland. They have stated this will lead to a 15% reduction in energy consumption. This technology forces cold air towards the front of the fridge using aerodynamics. This ensures less cold air escapes into the rest of the supermarket, increasing energy efficiency. Electronic Specifier reported that this solution has the potential to save up to 25% of energy for supermarkets.

If all supermarkets are forced to adopt this technology, the energy-saving could be astronomical. However, a simpler, more cost-effective, more impactful, and more efficient solution is to add a door.

What the Welsh Government is saying

In November 2019 Welsh Government responded to a petition, stating that it doesn't have the powers to “take further meaningful action”.

We would urge them to request the necessary powers from the UK government or use what powers they do have to induce change. However, we shouldn't need a government policy for change to happen.

We urge supermarkets to make the change voluntarily

Has this happened elsewhere? Yes, in France supermarkets voluntarily signed up to make this change in 2012. Three-quarters of France’s 450 miles of fridges will have doors by this year. Almost 8 years and a plethora of media attention and lobbying later, nothing has changed here in the UK.

So, supermarkets in Wales have a chance to become one of the first countries to make this change.