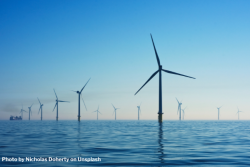 Upon hearing the term ‘renewable energy’, bright and hopeful images of solar panels, wind turbines and hydro power most likely spring to mind.

As we reel in shock from the latest UN climate report, the need to turn these easily conjured up visions of a green and sustainable future into a reality seems more urgent than ever.

But we need a rapid roll out of genuinely sustainable energy 'net zero' solutions, not false ones which end up generating even more climate-damaging emissions.

Biomass is not the answer

While the UK government fails to invest the adequate resources to meet the challenges we face, the biomass industry continues to be given a free pass. 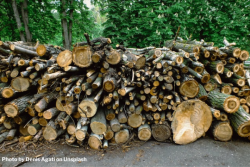 Not all renewable energy is good for the planet. Bioenergy – specifically woody biomass – is a highly disputed form of “renewable” energy which continues to rely on huge government subsidies to survive while industrialised logging companies across the US and Europe line their pockets.

Burning trees can release more CO2 into the atmosphere than coal but current EU policies fail to take account of this ‘carbon debt’.

Only last month campaigners sounded the alarm once again over current tweaks to EU biomass policy. Disproved carbon accounting is now baked into the system, a change in policy that's led to a rapid growth in demand for biomass since 2011 fuelling the loss of forests across Europe and the US.

As highlighted by the Cut Carbon Not Forests Campaign, the UK government now sits atop the pile of European nations subsidising this industry to the tune of £1.9 billion.

In November 2021 Cardiff Friends of the Earth became one of the many environmental groups to confront this reality by challenging renewed planning permission for a biomass plant (originally approved in 2018) in the east of Cardiff.

Splott biomass plant given the go-ahead 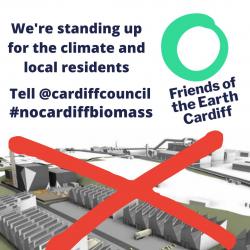 Despite concerns for local health and wellbeing in an already industrialised area of Cardiff, and a proposed site right next door to already disenfranchised communities, the plant achieved renewed planning permission in December 2020 in the blink of an eye.

Having highlighted the risks to local health as well as the global fight against climate breakdown, our group rallied opposition from local MPs, MSs, councillors and over 700 local residents in a petition.

Through this process we earned the right to speak out against the proposal to the planning committee, but in an infuriating planning system which seems to put development first over the protection of the environment, challenging the planning consent was incredibly difficult. 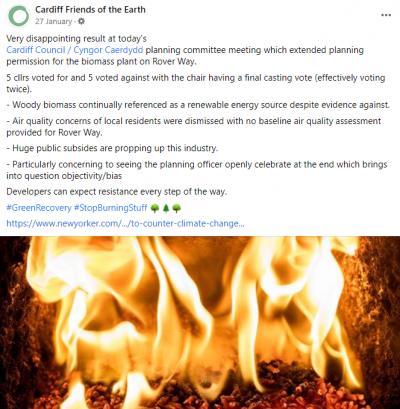 We had hoped it would be a fair and objective hearing but the planning committee were encouraged to approve the proposal through the work of the planning officer presenting the case to the committee.

On the screen we saw the planning officer visibly celebrating the decision to give this biomass plant the go ahead, which has shaken our faith in a planning process that is supposed to take due consideration for climate change.

The usual restricting factors on challenging planning permission on narrow grounds (particularly when planning has already once been approved) left us with little consolation that that wider climate and environmental considerations had been given due weight in the decision.

The planning committee appeared unconcerned by the fact that the plant would be importing and burning virgin wood from Latvia where logging is highly unregulated and feedstock is likely not to meet the sustainability requirements set out by the UK Climate Change Committee.

Across Wales there are now at least 6 plants which are either in operation, have planning permission secured, or have been built and are waiting to start operations. One such plant which has been built is a waste wood gasifier in Barry from Biomass UK No.2 Ltd. Years of opposition from the determined Local Docks Incinerator Action Group is one of the only things keeping this plant from being commissioned. The Welsh Government continue to kick the can down the road on the decision despite the lack of a clear environmental assessment which proves that the plant can be safely operated whilst protecting the health and wellbeing of the local community.

As we have seen with the recent moratorium on waste incineration, Welsh Government have a valuable opportunity to take a principled stand against using woody biomass as an energy source. Despite operations continuing in Holyhead and Port Talbot, there’s time to end the prospect of Cardiff and Barry following suit, and at a time when the world is literally ablaze with forest fires lighting up Greece, California and Canada, and deforestation continuing in the south east United States to feed the biofuel addiction across Europe, It’s imperative that the Welsh Government take stock and refuse to add fuel to the fire of our rapidly warming globe.